Rapper and Davido’s ex-artist, Sani Goriola Yusuf aka Lil Frosh who recently assaulted his ex-girlfriend, Gift has allegedly been rearrested by the police and awaiting trial.

Allegations of domestic violence had surfaced online in October 2020, where Lil Frosh was alleged to have been physically abusing Gift.

Gift had taken to her Instagram page that her estranged boyfriend, Lil Frosh, had hit her to a pulp; a piece of news that took the internet by storm.

It is also reported that he will soon be charged to court over the incident.

His friend and colleague Zinoleesky took to his Instastory and called for his freedom. 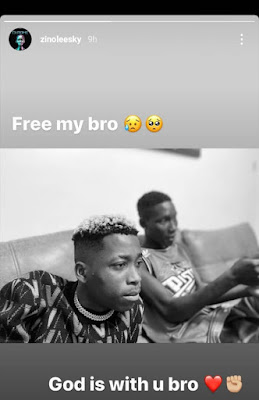