After Rangers’ 3-0 win over St Mirren on Saturday – complete with fans outside, plus Gerrard and players celebrating in the dressing room – only a Celtic win on Sunday could delay their rivals winning the title. 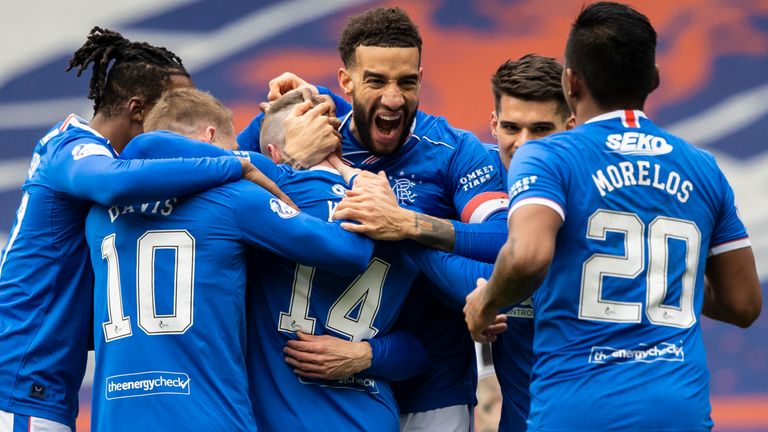 However the game at Tannadice finished 0-0, confirming that Celtic’s run of nine league titles in a row had come to an end and that Rangers were champions of Scotland for the first time in 10 years.

The title marked Rangers first major honours since the collapse of the club and subsequent rebirth in 2012.

It also prevented Celtic from attaining the mythical 10-in-a-row. Both Rangers and Celtic have won nine top-flight league titles in succession, but neither side has ever done 10.

Gerrard has now completed the major aim he had when he was appointed as Rangers boss in 2018. The Liverpool legend has won Rangers the league title and done so before Celtic could reach double figures.

Rangers are still unbeaten this season, having won 28 and drawing four of their 32 games played so far.

Celtic had over 25 attempts on goal against Dundee United, but couldn’t find a way past goalkeeper Benjamin Siegrist.

Rangers actually visit Celtic Park in their next league encounter, but Rangers will go in as confirmed champions for the 2020/21 season.

Rangers will now get the chance to lift the Scottish Premiership trophy at Ibrox before the end of the season in May.