Simi seems not to be bothered about the cheating allegation her husband is wrapped in.

Conntroversial Instagram blog, Gistlovers reported that Adekunle Gold has been sleeping with a video vixen and model simply known as Teminikan.

The blog further alleged that Adekunle Gold has been having an affair with Teminikan even whilst Simi was pregnant with their baby.

Speaking amid the report, Simi took to her Instagram story to show that she is unbothered about the allegations.

But has many expected her to react to the allegation, Simi simply spoke about the drink she is addicted to.

She wrote, “Too much apple juice today, clearly still addicted”. 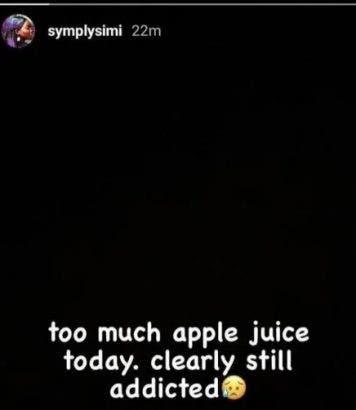