Lewis Hamilton celebrated his 99th Formula One pole position after seeing off Red Bull’s Sergio Perez and Max Verstappen in qualifying for the Emilia Romagna Grand Prix at Imola on Saturday.

Mexican Perez, in only his second race for Red Bull, lines up alongside Mercedes’ seven-time world champion for what will be his first front row start.
Verstappen, fastest in final practice at the Italian circuit and chasing a hat-trick of poles, had to settle for third with Ferrari’s Charles Leclerc a strong fourth on a home track for the revived Italian team.
Hamilton did enough with his first flying lap of one minute 14.411 seconds, but Perez came close at the end with an effort only 0.035 slower.
“I definitely didn’t expect us to be ahead of two Red Bulls,” said Hamilton, who won the season-opener in Bahrain last month after Verstappen started on pole.
“I think they have been so quick this weekend, there were times when they were six-tenths ahead.
“I came around the last corner and heard I’d got the pole and I was super grateful,” added the 36-year-old, who has now taken poles on a record 30 different circuits. 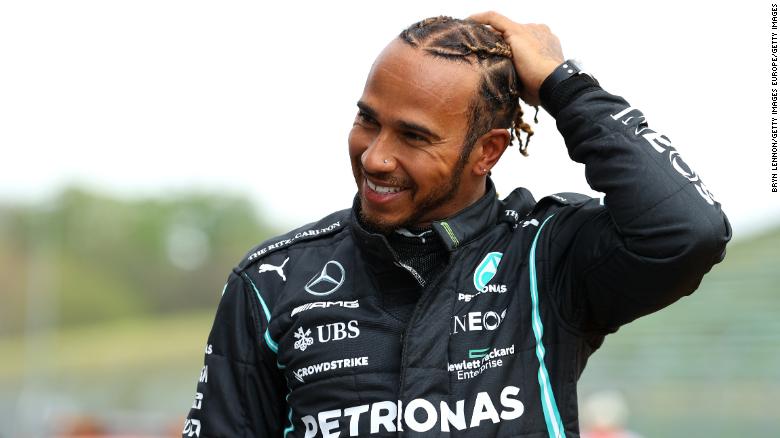 Perez, who boasts more than a decade of experience in Formula One, was brought in to put more pressure on Mercedes than Verstappen’s recent team mates had managed and duly delivered.’
The Mexican still felt he could have done better.
“I’ve been improving, P2, but I should’ve been on pole and I did a mistake on the final corner,” said Perez, a first time winner with Racing Point (now Aston Martin) in Bahrain last year.
It was the first time Verstappen had been outqualified by a team mate in regular conditions since Australian Daniel Ricciardo was alongside at Red Bull in 2018.
“You can’t be good every time, so we’ll see what went wrong,” said the Dutch driver. “It’s still P3, which is a good starting position.”