Brazilian Oliveira extended his winning streak to nine on a dramatic night in Houston, Texas. 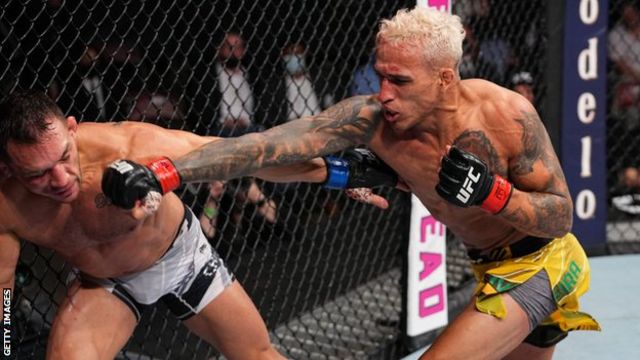 The bout formed the main event of UFC 262 at the Toyota Center, where the capacity crowd of 16,000 fans saw Oliveira, 31, produce a thrilling come-from-behind performance to capture the title vacated this year by the retiring Khabib Nurmagomedov.

When the action got under way, the momentum swung back and forth as both men threatened to claim a stoppage victory in a wild opening round.

Chandler connected with a big left hand, which forced Oliveira to shoot for a takedown, but the American immediately locked up a guillotine choke that Oliveira did well to escape from.

Oliveira then switched positions, took Chandler’s back and looked to work his way to a rear-naked choke submission. But Chandler exploded his way out of the position and returned to his feet as the crowd roared its approval.

With the fight back on its feet, Chandler loaded up and let fly with his hands as he came close to scoring a first-round TKO finish.

Two big punches hurt Oliveira, who took to the mat in a bid to escape the American’s punching power, but Chandler followed him to the canvas and continued landing heavy ground strikes to close out a back-and-forth opening round.

At the start of round two, the bout turned on its head again when Oliveira stepped into striking range and dropped Chandler with a huge left hand.

Chandler quickly got back to his feet, but was clearly still rocked, and Oliveira followed up with more punches that forced Chandler down to the canvas again, where a flurry of ground strikes forced referee Dan Miragliotta to stop the fight 19 seconds into the round.

An elated Oliveira hurdled the cage fence and, after an excited exchange with the UFC commentary team, charged into the crowd to celebrate with the fans before eventually returning to the cage receive his championship belt.

“I told you I was going to knock him out, and I came and knocked him out,” said Oliveira after his victory, which gave him the record for the most finishes in UFC history with 17.

“I’m proving to everybody, I’m the lion of lions.

“Michael, you’re a great champion, but today was my day. Michael said I couldn’t take pressure, and he hit, hit, hit. And I’m still here. Here’s the belt!”

Chandler was classy and magnanimous in defeat as he paid tribute to the newly crowned champion, before promising to return to the octagon and win the title within the next year.

“We saw one of the toughest dudes on the planet come back from some adversity – Charles Oliveira is the real deal,” said 35-year-old Chandler.

“I take nothing away from him. I will be back. I promise you I’m going to win that UFC strap within the next 12 months. This was a great opportunity. I thank the UFC for this opportunity.

“Charles Oliveira showed how he’s a consummate professional. He’s showed up for the last 10, 11 years here inside the UFC octagon.

Ferguson was greeted by a huge roar from the crowd as he made his way into the octagon, but the 37-year-old was unable to give the fans the victory they craved.

Dariush, a former no-gi jiu jitsu world champion, showcased his grappling superiority throughout their three-round lightweight bout, with all three judges scoring the fight 30-27 to the 32-year-old, who registered his 21st career win.

Dariush’s victory extended his winning streak to seven fights, and added a huge name to a list that includes Drew Dober, Scott Holtzman and Diego Ferreira.

After the fight, Dariush was incredulous that Ferguson survived his second-round heel hook attempt as he hailed his opponent’s toughness.

“It popped. Tony just went, ‘Eh?’ and then he looked at me like nothing happened,” Dariush said. “He’s a zombie. No doubt about it!”

Dariush said he wants a big fight for his next assignment.

“I’d like to see myself in a title eliminator, whatever that is. But I’m going to go on a break. My daughter’s coming next month. I’ll see you guys end of the year or early next year. I want to spend time with my daughter.”