As many as 11 people are dead – most of them children – and 21 injured after a “terrorist” went on a school shooting rampage, it is reported.

Two students were said to have died of injuries they suffered when they jumped out of a third-floor window at school No175 in the city of Kazan.

Harrowing video shows terrified children jumping out of upper-floor windows to escape the gun and bomb, while others climbed down ladders set up under windows. 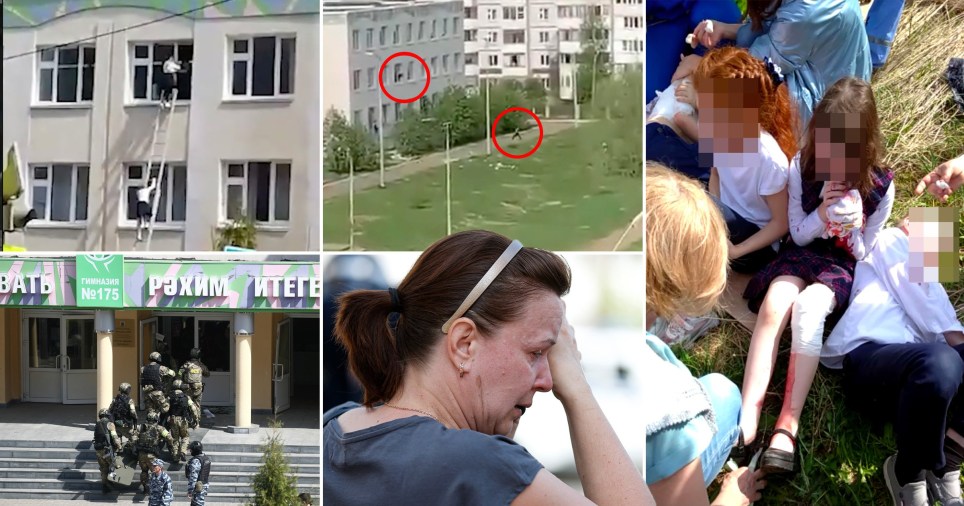 The suspect, a 19-year-old man, had reportedly warned on his Telegram social media account that he was planning an attack, writing in a chilling post: “You will all be done.”

Local officials said the massacre was carried out by a lone gunman following multiple reports which claimed there were two shooters.

Pupils described scenes of chaos and confusion as the sound of an explosion “thundered” through corridors, followed by gunshots as the killer went from room to room during the attack.

Video recorded from a distance showed white smoke wafting from a window as children run away from the building, and the sound of gunfire is heard.

Wounded and bloodied children were treated on the floor outside the school, where parents were seen in tears, before being rushed to hospital.

A male was seen in handcuffs as he was led away from the school by armed police. It is said that he was carrying a gun when he was detained and he had obtained a gun licence just 13 days ago.

The suspect was reported to be a former student who graduated four years ago and was currently enrolled at a local university.

There was confusion over the death toll, with the regional president saying seven children were killed, and various reports claiming the death toll was between eight and 11.