Some twenty-four hours after taking one of the most lampooned decisions since he came into power six years ago, there is no respite for Nigerian President, Major General Muhammadu Buhari (retd.), as world superpowers on Saturday flayed his government over the suspension of the ‘operations’ of microblogging site Twitter in the West African country.

In a joint statement, Canada, the European Union, the Republic of Ireland, the United Kingdom and the United States of America said banning systems of expression is not the way forward.

The statement was titled, ‘Joint Statement From The Diplomatic Missions Of Canada, The European Union (Delegation To Nigeria), The Republic Of Ireland, The United Kingdom And The United States Of America’.

It read, “The diplomatic missions of Canada, the European Union (Delegation to Nigeria), the Republic of Ireland, the United Kingdom and the United States of America convey our disappointment over the Government of Nigeria’s announcement suspending #Twitter and proposing registration requirements for other social media.

“We strongly support the fundamental human right of free expression and access to information as a pillar of democracy in Nigeria as around the world and these rights apply online as well as offline.

“Banning systems of expression is not the answer. These measures inhibit access to information and commerce at precisely the moment when Nigeria needs to foster inclusive dialogue and expression of opinions, as well as share vital information in this time of the COVID-19 pandemic.

“The path to a more secure Nigeria lies in more, not less, communication to accompany the concerted efforts of Nigeria’s citizens in fulsome dialogue toward unity, peace and prosperity.

“As Nigeria’s partners, we stand ready to assist in achieving these goals.” 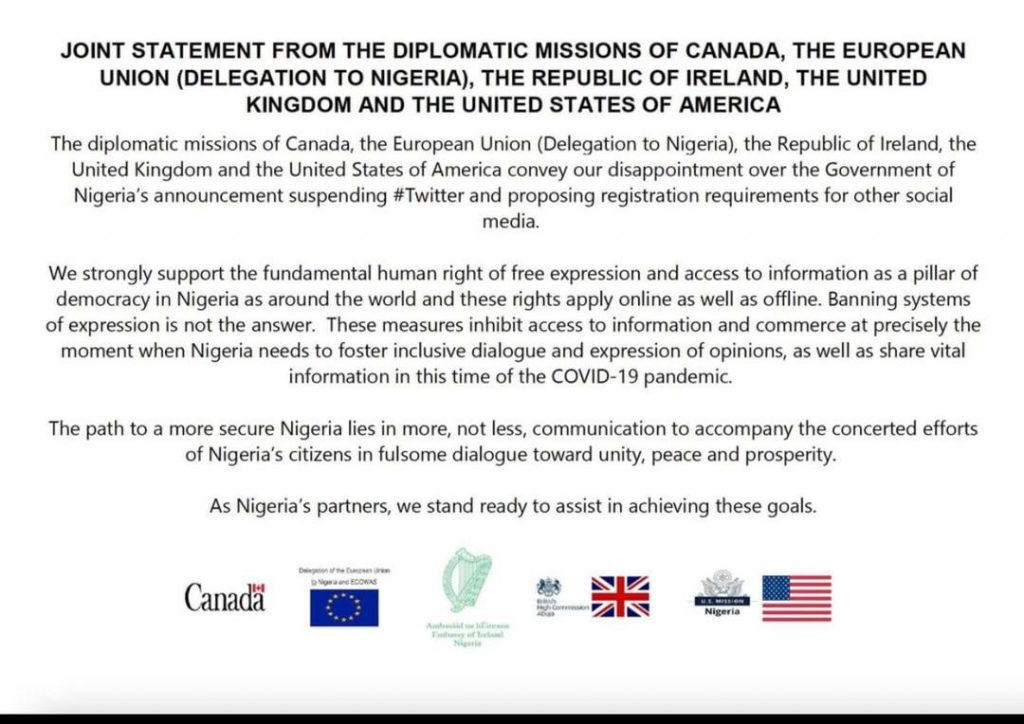 Consequently, Minister of Information and Culture, Lai Mohammed, announced the suspension of Twitter on Friday, citing the “persistent use of the platform for activities that are capable of undermining Nigeria’s corporate existence”.

Mobile network operators also said they received a directive from the Nigerian Communications Commission to block access to Twitter in the country following the suspension by the government.

Also, the Attorney-General of the Federation, Abubakar Malami (SAN), ordered the prosecution of violators of the Twitter ban.